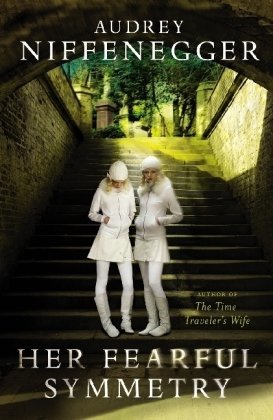 Despite the appalling title (really? her what? -), I picked this book up to read as I loved The Time Traveller’s Wife so much, for its imagination and oh so skilfully crafted plotline.

This is a ghost story about estranged identical twin sisters, one with identical twin daughters. When Elspeth, one of the elder twins dies, she wills her large apartment overlooking the historic Highgate Cemetery in London to the younger twins, who she hasn’t seen since they were tiny babies. But it seems that even in death, Elspeth can not quite leave her flat, and becomes a force within it.

There has been a great rift many years ago between Elspeth and her twin Edie, the younger twins’ mother. Edie, who lives in America, has never spoken of Elspeth to Julia and Valentina because of some mysterious and dark secret.

Arriving in a strange country to live in the apartment of an aunt they never knew they had, Valentina and Julia spend their days exploring London. Valentina feels stifled by her elder twin Julia, who in turn feels utterly sure that her purpose in life is to keep her asthmatic sister safe from harm.  There is Elspeth’s grieving lover who lives in the apartment downstairs, and there’s an obsessive compulsive crossword setter who lives upstairs. It’s a complex story of relationships both real and imagined, of human frailty and what prompts us to behave the way we do.

There are some aspects of the book that I found a bit far-fetched (although perhaps surprisingly, the ghost of Elspeth was definitely not one of them). However, Niffenegger’s writing is vivid, the plot is wonderfully imaginative, well-woven and gripping.

Despite its faults, there are great characters, and some great scenes in this book, and it has to be said, some sections that were totally gobsmacking.

Niffenegger is a wonderful storyteller, and Her Fearful Symmetry is well worth a read.