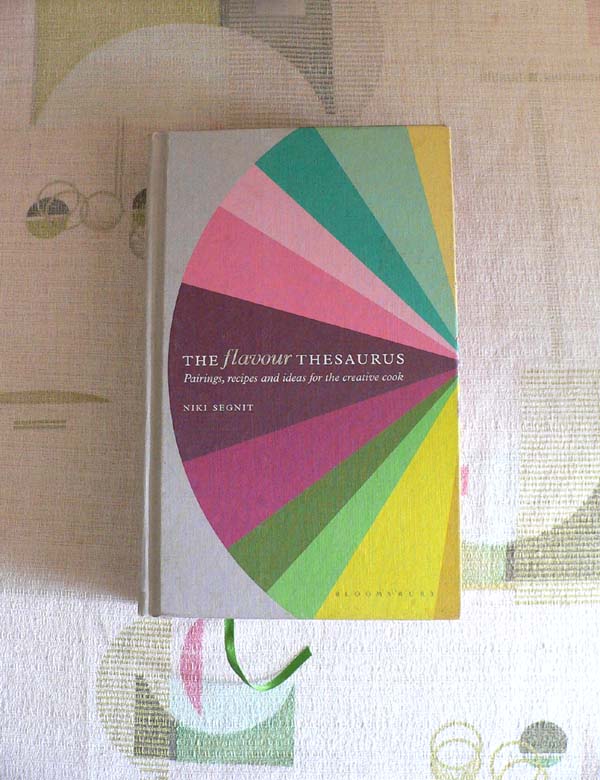 I have seen a few mentions of this book on wishlists of late, and I thought I’d tell you what I think of it.

Essentially, this book is about the pairings (or or perhaps the parings) of different types of flavours, and why and how well they work (or not, as the case may be). More specific than describing taste according to the four types of receptors on the tongue (bitter, salty, sour, sweet), it further groups flavours into categories such as cheesy, earthy, green & grassy, and roasted. So, using pairings that are relatively common from around the world (have you heard of watermelon & chilli? apparently it’s popular in Mexico) the book serves us bite-size chunks of info-tainment garnished with an obtuse wit.

There are wild pears and wild pairs. And seriously, there are bits that are plain bananas. Chocolate and Coconut starts off thus – “Just as government health departments warn that using marijuana can lead to harder drugs, so sweet tobacco led to my addiction to cigarettes”. Erm… what?? The rest of the entry does kind of follow on in a brambly kind of fashion, but in her attempts to add zest she ends up with a very strange fruit.

She’s no dill – there are great nuggets of foodie wisdom, and the book comes with  recommendations from Heston Blumenthal and Hugh Fearnley-Whittinghall, but some bits are hard to swallow. On Cauliflower and Almond she says “[Restaurateur] Anthony Finn … created a cauliflower trifle – a puree of cauliflower cream with grape jelly and brioche. He’s also conceived a cauliflower and almond creme caramel”. And so does it work? Is the flavour combination viable?? Well, that’s pretty much the whole entry, and so we are left in a jam.

But there are recipes too, and ideas for how to pair the flavours so that they work to their best advantage. She does sound like an egghead at times, but she’s done her research and the book is peppered with amazing bits of trivia – did you know there is a celery-flavoured soda available in New York? Or that when bananas weren’t available in Britain during WWII, mock bananas were made from parsnip? I kid you not. But she does occasionally tend to waffle, and nothing can stop her when she’s on a roll.

After gingerly picking my way through this strange and surprising smorgasbord, I would have to say the book can be summed up as a curious balance of tangy and savoury, with startling notes of fruitcake.