I first came across Third Half Studios’ All Meat on Spoonflower a year or so back, and laughed and laughed.  On further investigation, I found the wonderful Putting a Point on It, with the description “Baroque ornament rendered in a different sized dots. I do not understand how Seurat did it since I only used three colors and nearly went blind.” That made me sit up and tilt my head in a weird kind of quizzical fashion. I didn’t quite understand what conceptual planet they were living on, but have been keeping an eye on them ever since. 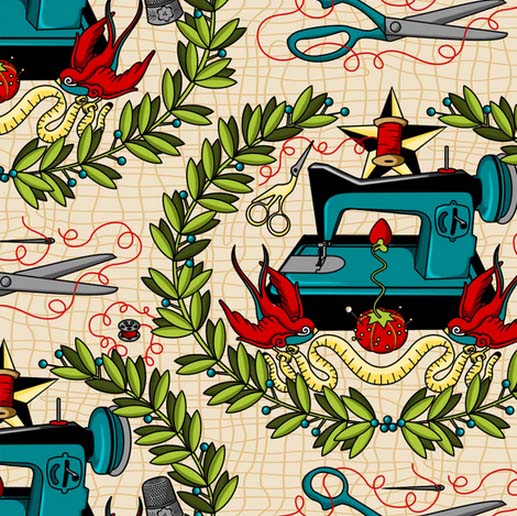 reap what you sew

Influenced by a huge variety of stuff, including the vast reaches of art history, mid-century and 70s design, comics, folklore and tattoo culture,  their designs are a pot pourri of colour and shapes, whimsy and darkness. It seems just about anything is fodder for their imaginations. A sharp eye (or two) and a keen wit hold it all together. Downspout (Earth) is a particular favourite for its apparently straight 70s design with suggestion of an intestinal tract.

Third Half Studios is based in Atlanta, Georgia, and is the brainchild of Lori Kishlar and Sarah Marks. Despite an affinity for zombie squirrels and two-headed cows, in some ways Lori and Sarah are chalk and cheese – perhaps that is why they work together so well.  They were both very excited when I approached them for an interview. Here are their stories. 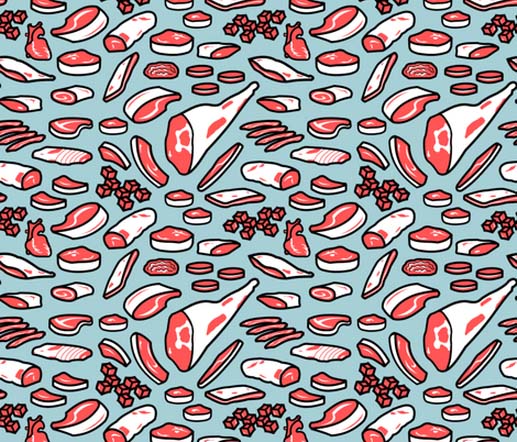 all meat {in blue}

Welcome Sarah and Lori! Could you briefly outline how your business came about?

Sarah: We started late in 2009 – Lori was in my Craft Group – Atlanta Church of Craft and she was complaining that she couldn’t find any fabrics with creepy, subversive, unusual themes. So I piped up that it couldn’t be THAT hard to make your own fabric, at which point she pretty much dared me to do it. So I did it through Spoonflower. She took one look at it and said, “Maybe we should go into business together.”

Did either of you have another career before this?
Sarah: My first job at fourteen was painting names and teddy bears and things on ruffled parasols at this booth at the shopping mall. It was right next to the men’s bathroom. I started pedalling homemade earrings and art to local shops in a place called little five points when I was sixteen. I had a few other shopping mall type art jobs and then I ended up being a lead sculptor at this tiny studio. We were commissioned to do 128 cast stone planters for the West Wing garden at the Smithsonian. I designed, sculpted and cast them. I have no idea if they are still there, but they are made out of concrete – so they are definitely somewhere. 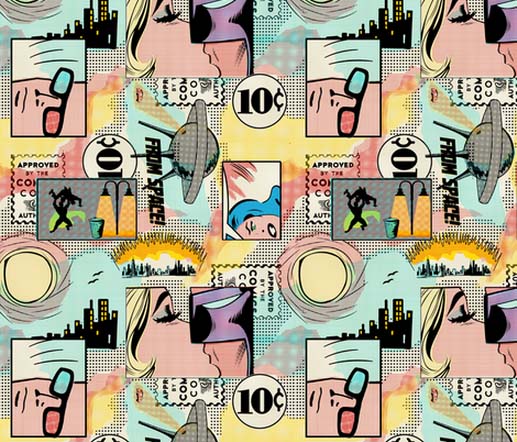 What are your childhood experiences and memories of craft and/or design?
Lori: There weren’t a lot of kids in my neighbourhood so I became a master of latch hook.  There was a bargain clearance store about a mile away and my sister and I would walk up there and steal candy and buy latch hook kits. Once I found 40 bucks at the store.  We turned it in and no one claimed it so 2 weeks later I got it and had my dad take me straight to the craft store.
Sarah: When I was six years old I inexplicably designed the entire cast of settlers of Roanoke including the dead infant Virginia Dare out of construction paper. In elementary school I was constantly getting dragged in front of counsellors wanting to discuss my “art.” I was a creepy little girl.

Are there any creative people in your family background? Especially any that influenced you?
Lori: When my mom was home with us as tiny kids she was a wonderful needle pointer.  She made gorgeous pillows and wall hangings.  She also was known to make an afghan or two.  My sister did tile work for a long time, mosaics, but I don’t think either of these influenced me.  I was just always doing something like drawing.
Sarah: My paternal grandmother was a painter – oils mostly. I didn’t know her very well when she came to live with us and she was already knee deep in Alzheimer’s. I was her primary caretaker from the ages of 15 to 21 and even though we didn’t really have a traditional grandparent/child relationship, I used to draw her often. So I have a kind of documentation of her decline, which was terrifying and awful and beautiful in a weird way. I have her easel in my living room and I work from it frequently. 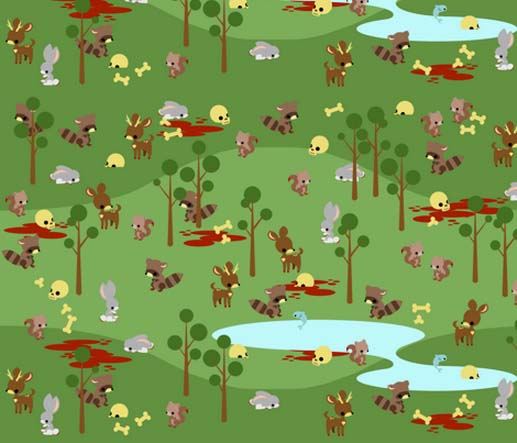 What is your worst experience as a crafter/designer, and how did you overcome it?
Sarah: I was living on the street for a couple of months and that is the only time in my life that I didn’t create anything. Oddly enough a sculptor plucked me up off the street and gave me a place to stay and a job working in his studio, but it wasn’t by my hand that I solved it.

What has been the hardest single obstacle to your life in design/craft?
Sarah: Sticking with only a few mediums so I can get better at them.
Lori: Time. I work full-time as does Sarah so finding the time to get all of my ideas out is hard.  I get bogged down making the items we need a lot of and I don’t find or make time for new stuff. So it gets a little sweat shop-ish before a big festival.

What has been the icing on the cake for you as a designer/craftsperson?
Sarah: Partnering up with Lori. She really keeps me in check otherwise artistically I would be going off like a firehose.
Lori: When people keep coming back to buy more.  And the fact that people really like our stuff. 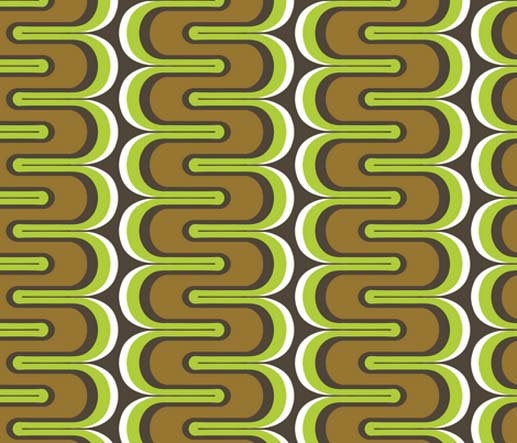 Who do you admire?
Sarah: I have so many influences I am not sure I can pick just a few. My parents had this coffee table book called “10,000 years of Art” and I was obsessed with that book from the time I was so young that I had to turn the pages with two hands. I love ancient art and classical and modern and urban, even stuff I don’t like I sort of do in the sense that even though I don’t like it – I am glad it exists.
Lori: I admire people who get out there and just do it.  You need to do things you want and not just wish you did it.

What is the favourite thing about the place you live in?
Lori: I like the green spaces and the temperature of Atlanta.  We never get too arctic cold in the winter.  In my house- I like my dogs and bed.  One of my dogs Turkey comes up each morning and wallows for what we call “Turkey time”.  She snorts and grunts and just rolls around for belly scratches.
Sarah: We have this remarkable multicultural vibe here (Northern suburb of Atlanta) and we have the best food in 3 square miles than the entire city of Atlanta. I can get Cuban, Chinese, Korean, Mexican, Indian and Italian all delivered to the house. The farmers market is full of fruit I have never seen and packed foods I wouldn’t know what to do with. You can get Frozen Edumame, Lobster tails, Russian Perogi and alligator meat all from the same aisle. There is something really exquisite about that to me. 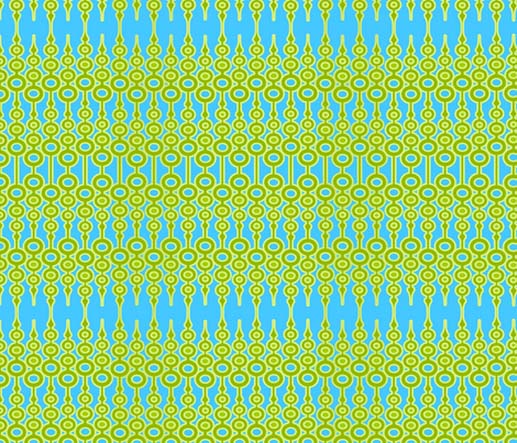 Could you describe your creative space in a couple of sentences?
Lori: I want to redo my crafting space because it is pretty cluttered. I sit at a desk facing the TV.  A lot of the time the TV is just for background.  I have WAY too much junk crammed in the room and one day I can expand into the tiny house I rent out back!
Sarah: I have citrus green walls, pink flamingos in house plants, piles and piles of craft supplies and half finished projects leaning up against the walls. My electronics soldering station is next to my sewing station.

And finally, what is the best piece of advice you’ve ever been given?
Sarah: Don’t fight your own vision, just let it happen and even if it doesn’t make sense to you when you are doing it, it might when you step back.
Lori: Don’t say should.  Say I will try it or I will do it.  What’s the worst that can happen? 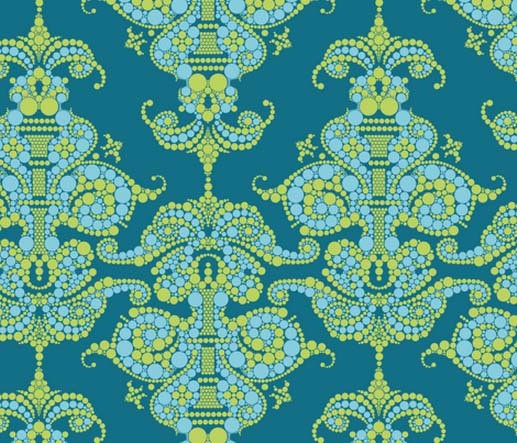 putting a point on it {turquoise lime}

You can find more of Third Half Studios’ fabric designs on Spoonflower, and also have a look at the other things they do on their own website http://www.thirdhalfstudios.com/ and Etsy.

I would like thank both Lori and Sarah for generously sharing their designs and words here.