After a high flying career in publishing and launching his own agency, it was not until he was struck down by illness and a prolonged recovery that Lewis Mark Grimes came to surface design. 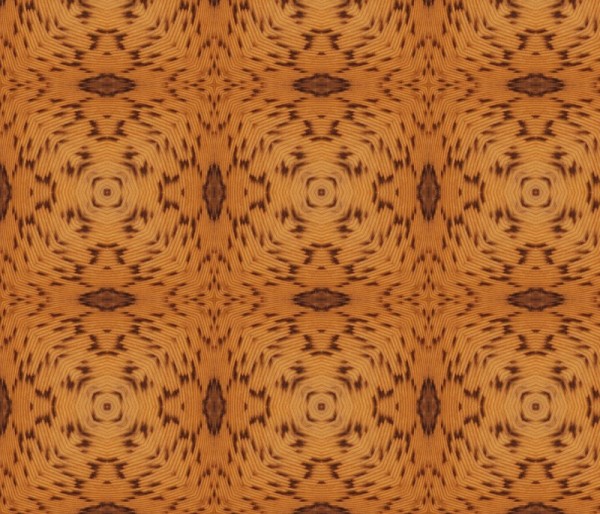 feather rishi – a tisket a tasket

Working solely with molted feathers and designing in digital kaleidoscopes, much of his work is reminiscent of shibori with its undulating tones, but retains its own distinctive textures. And although he occasionally dabbles in neon brights and altered colour schemes, his most sensuous designs use the natural (and sometimes surprising) hues of the feathers themselves. 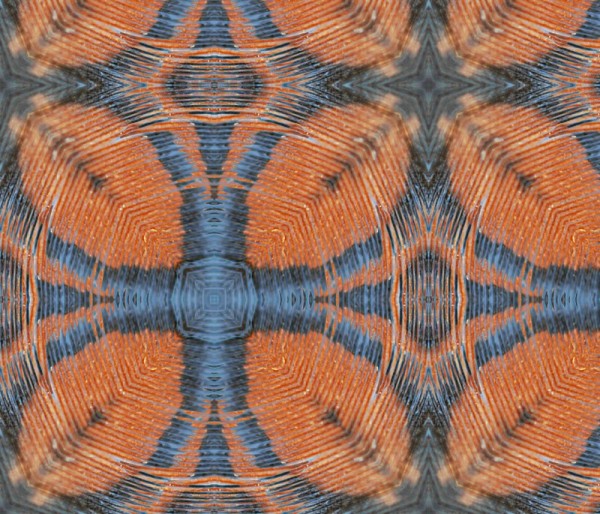 Residing in San Diego, California, he is currently undertaking Honours at college. “I reside in a small place where the rooms are multi-purpose. So my workspace is layered with the textures and patterns of school, work, play and prayer. Mostly I pray for a larger workspace.” 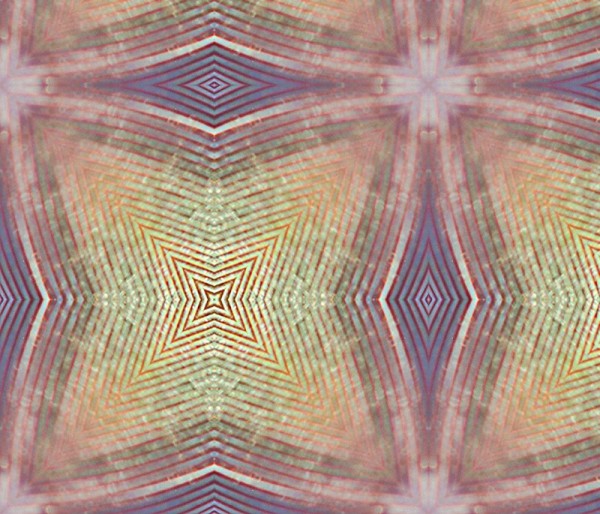 “It was a great surprise to me that I was a surface artist. I went back to college in ’08 and assessment tests pointed me to art. Skepticism was my initial response – as a boy, my family had told me I was a horrible artist and they discouraged me. But I dutifully signed up for some art and graphic design classes. My painting and drawing professors were generous and they gave me high grades I ill-deserved but graphic design was another matter. Although my introductory course was something like swimming in quicksand (I only got a B) I sensed I was home at last. After that it was all A’s and I found my lifelong fascination with art, style, fashion and design was something I could enjoy and master.”

“I guess the quintessential, best thing that’s happened to me as a designer is keeping rare birds and making friends with parrots. It was part of my recovery. I kept all their molted feathers which I was able to utilize as models for my school art projects. Then my professors said what I was doing was unique. Pretty soon I was calling my work a new genre.” 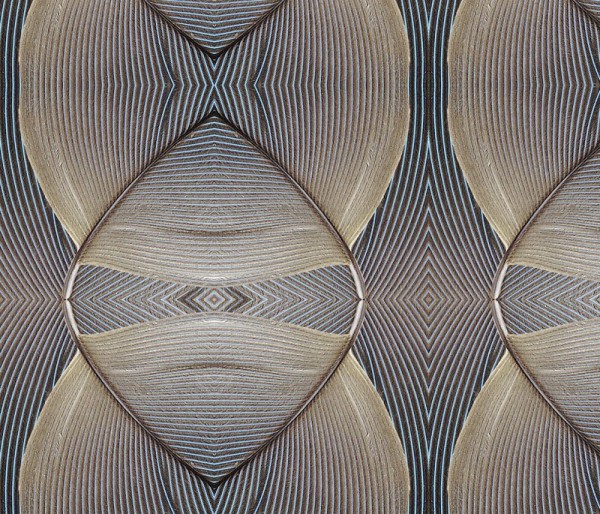 Like most creatives, he has struggled with finding enough time to do everything he wanted. But he reckons he’s got that sorted. “I have two inventions, patent-pending: the 48 month calendar and the 48 hour clock. I don’t know why I’m the first to come up with these breakthroughs, but they have given me a new lease on life.” 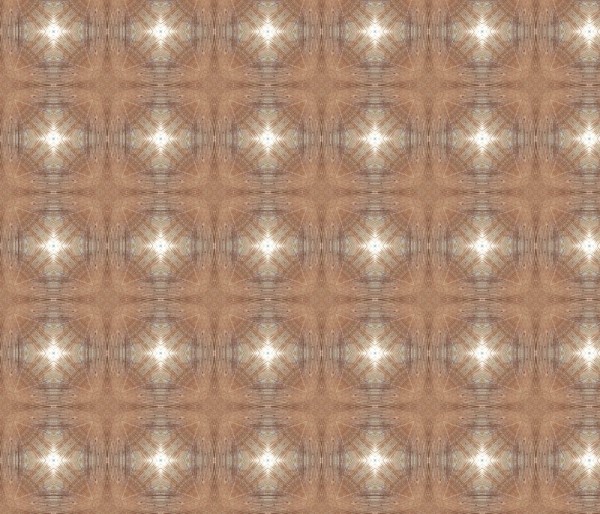 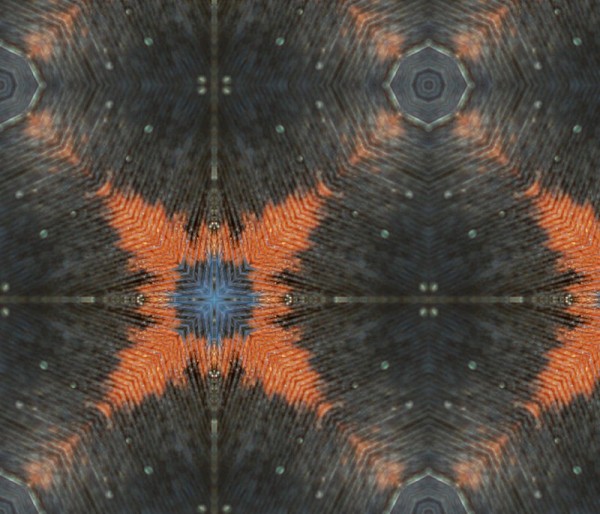 His early years were not filled with inspiring memories of art and design. “During my childhood my stepfather was extremely ambitious. He wanted our house to win the annual competition for best decorated. We lived in Anchorage, Alaska. I remember one bitterly cold winter. There was no snow. We had mannequins dressed like elves and Santa, the sleigh and the whole team of reindeer to exhibit. I was tasked with gluing cotton to the display to create the illusion of snow. My mittens would freeze and I cursed the day. Well, I won’t go into that. That was my earliest memory of craft and I swore I would never, ever, ever go into anything like that.”

Lewis started his career in publishing, working with some great names. “I worked at ICM for Lynn Nesbit, one of the top literary agents in the business, and I worked with such authors as Jimmy Carter, Carol Burnett, Hunter S. Thompson and Anne Rice. I stayed with her when she joined the top commercial agent in the world, Dr. Morton Janklow and worked with an expanded roster of authors including Jackie Collins, Judith Krantz, Harold Bloom and Danielle Steel. I was a cockie young man and so went off to start my own agency after years of launching the careers of many new authors. Then, I had a devastating illness, lost that agency and was brought low. After years of rehab, I was thrilled to have had the experiences and grateful for the opportunities. Yet I knew there was something more and I’m especially lucky to have found my way to design.” 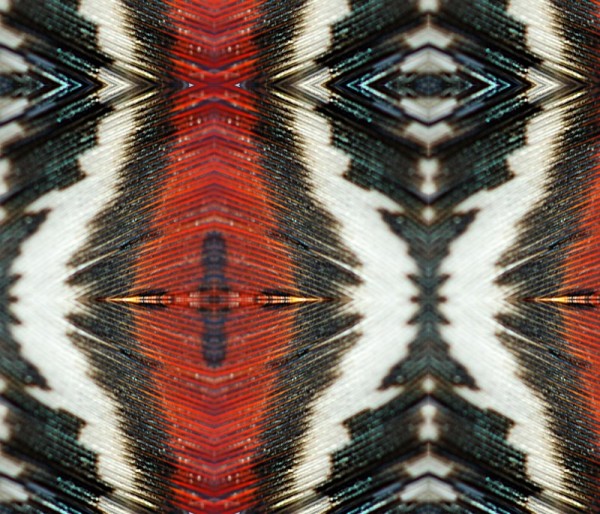 This year will be an especially important one for him – he has been accepted to exhibit at the Licensing Expo in Las Vegas. “This will be the fourth year I’ve attempted to go to the show. It’s happening this time. I’ve engaged a fabulous model, designed two dresses for her. I just ordered the fabric printing on Spoonflower!”

We wish you all the best, Lewis!

You can find more of Lewis’ work on Spoonflower at feather_rishi.